Unikube does not simply give you the possibility to set up and run a local Kubernetes cluster. It aims to be an application development system. Unikube developers are able to write code directly within a Kubernetes environment without the need to take care of any Kubernetes aspects.

This chapter describes how you can prepare an application development setup to leverage the full convenience of the Unikube CLI.

For a range of different tasks you may have to run application specific commands in your service, for instance to create a superuser. In order to easily get an interactive shell in an app container run:

You will be prompted with all available apps in your current project context. Select the one you want and go ahead with your command line superpower.

The command unikube app switch is the central entry point for local Kubernetes-based development. The idea is to literally switch a locally running container with an instance running in a (Unikube provided) Kubernetes cluster. All network traffic from and to the cluster instance is then tunneled to the local application. This enables developers to make changes to the source code, files, environment variables (and other settings) and let them run in the context of all the other attached services. 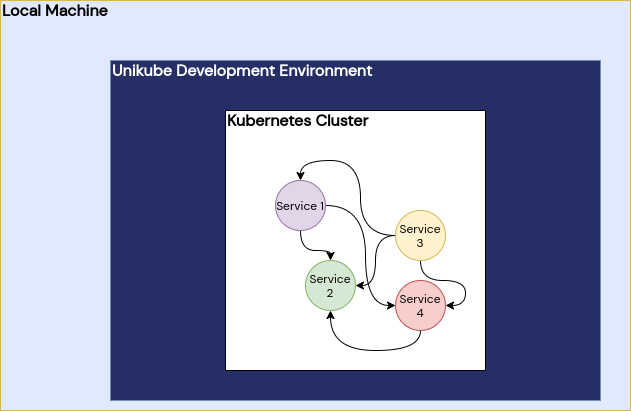 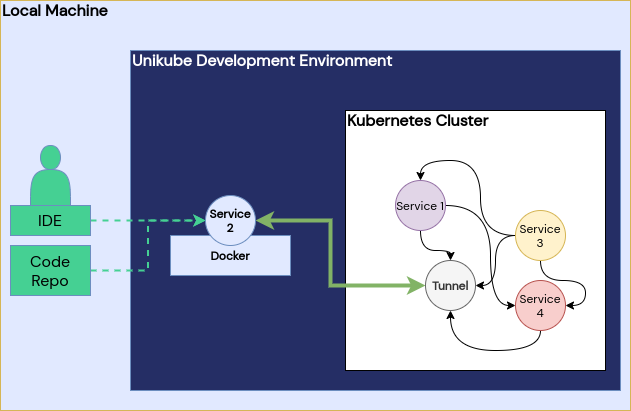 The command unikube app switch starts a local container and tunnels all traffic to the target within the cluster.

You may run the switch command with a long parameter list, or execute the command from a location containing a Unikubefile.

Before the actual switch operation is started, the Unikube CLI builds the container image according to the specification in the Unikubefile. Be sure your image can actually build with these parameters. The next step is to start the container from your Dockerfile and mount the source code as volume in the container to always work with the latest code. If you have overwritten environment variables they will be set in the container as well. Before you can see the traffic hitting your local container you will be prompted for your root password. The Unikube CLI has to perform DNS modifications on your host system in order to be able to reach services within the cluster.

If everything went fine up to here and your application server supports code hot-reloading you can see changes in your current working tree immediately reflected in the cluster. You can still enter this container on an interactive shell with the unikube app shell command.

This feature is realized with Telepresence 2.

The Unikubefile is a file with yaml notation, that should contain all necessary information for Unikube about the service. It specifies a Docker build, volumes, environment, commands and context. The file must be named unikube.yaml for the command unikube app switch (see unikube app switch) to be automatically used.

Most of the keys in the Unikubefile are optional. Here is a description what those keys control:

The source repository of the project should include a valid Dockerfile and a Unikubefile to run this operation as smooth as possible.

Unikube’s CLI can manage organisations, projects, decks and interact with apps. As it can be cumbersome to enter identifiers again and again, you can set a context for the commands to implicitly assume a certain unit (pretty much the same as with kubectl). In order to set a context, run the context commands.

← Provision of a Development Environment